Why you should get rid of Pigeons 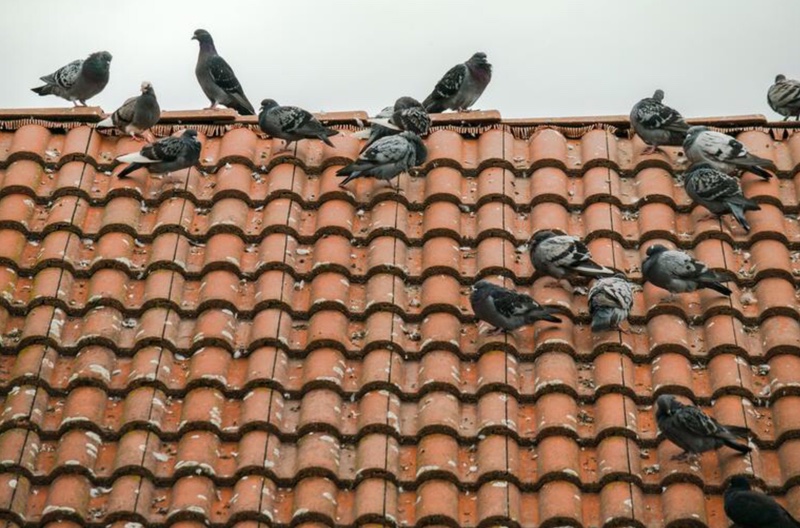 Pigeons may seem harmless, but these pest birds cause millions of dollars in damage every year to buildings, ventilation systems, machinery, statues, roofs, and much more.  Bird droppings and nesting materials left by pigeons pose physical problems and health hazards that can become very serious if not corrected quickly making prompt and effective professional bird control is often essential.

There are many health risks associated with pigeons and their droppings.  The bacteria, fungi, and ectoparasites that they and their droppings harbor are numerous.  The four most common ways disease is passed by bird to human are: inhalation of fecal dust, food and water contaminated with bird feces, direct contact with feces, and parasitic transfer.

Pigeon droppings can expose humans to many diseases, including salmonella, Newcastle disease, candidiasis, encephalitis, orthosis, and toxoplasmosis.  In addition, they can also carry cryptococcosis, and coccidiodomycosis, which cause meningitis.  The droppings may also harbor growth of fungus, which causes histoplasmosis.  Fleas, lice, mites, and other pests often live on these birds, hitching a ride to where ever they want to jump off. Pigeons may also attract other pests, such as rats, which feed on dead pigeons and food that well-intentioned bird lovers may scatter for them.

In addition to disease, bird droppings are known for triggering 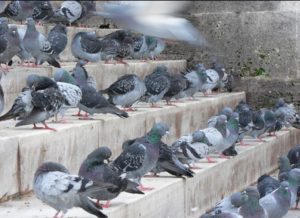 people to slip and fall, which makes it especially important to rid the birds from highly trafficked areas.

These are messy birds, leaving droppings everywhere they go, particularly near their roost sites.  Pigeon droppings are not just gross, they are also full of uric acid which makes them extremely corrosive.  The droppings are the direct cause of millions of dollars in damage to buildings and other structures.  Particularly vulnerable are painted surfaces, awnings, signs, and other similar surfaces.  A tragic example of the corrosiveness of pigeon droppings is the Minnesota bridge accident in 2007, which was found to be the direct result of bird droppings eating away at the metal bridge supports until they weakened.

In addition to the damage cause by their acidic droppings, pigeon nests can also cause damage.  Pest birds will often build nests in gutters or on roof corners blocking essential drainage systems.  Every year several warehouses experience roof damage, and even collapse, when drainage systems have been blocked and standing water rises just six inches.  Bird nests can also block ventilation systems, which not only prevents exhaust of potentially harmful gases, but also has the potential to spread diseases.  Fire is also a potential hazard.  Nesting materials are usually flammable, consisting of twigs, straw, grasses and dried droppings.  When pest birds build their nests inside electric signs or other machinery there is a great risk of fire.

Pigeons are creatures of habit and highly social.  Once they have found a cozy spot the will return again and again, bringing along more of their pigeon pals. Prolific breeders, pigeons can hatch several broods a year, sometimes even laying a new clutch before the previous have even hatched.   Often our buildings and structures have architectural features such as drain spouts and eaves that make perfect nesting spots for these birds. Pigeons are comfortable around humans and they’re hard to scare away or deter.  Once a flock of stubborn unwanted pigeons have set up shop in/on your building, it can be stubbornly resistant to removal, often requiring the services of a pest control or animal control professional. As is true of many pests that invade our homes and businesses, the first step to controlling feral pigeons is to remove their food source.

If you need help to prevent or eliminate pesky problem pigeons, please contact our trained Sacramento pest control professionals at 916-457-7605 or click here.