Pigeons are a Health Hazard 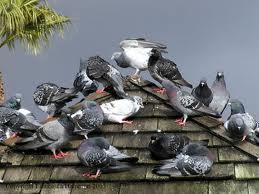 Pigeons are well known to carry and spread diseases through their droppings. Pigeons can transmit a number of diseases such as Histoplasmosis, Pigeon Ornithosis, Salmonella, Cryptococcosis, Toxoplasmosis, and Encephalitis. Pigeons can host numerous ectoparasites as well; such as ticks, flies, fleas, mites and biting lice which also carry disease. Some insects that inhabit the nests of pigeons are also fabric pests and/or pantry pests. To make matter worse, pigeon droppings can also make structural surfaces slick and hazardous. Health claims and lawsuits resulting from diseases or injuries attributed to pigeons can easily exceed 100K.

Collections of droppings may also provide a medium for bacterial and fungal growth that could pose a potential public health problem. Human diseases that are known to be associated with pigeon droppings: Histoplasmosis, Cryptococcosis, Psittacosis, and Toxoplasmosis.

Histoplasmosis is a disease caused by a fungus, which grows in pigeon droppings. It also grows in soils and is found throughout the world. When cleaning droppings a person may breathe in some of the fungus, which in cases of high exposure can cause infection. Common activities, such as cleaning off windowsills, will not result in high exposures.

Symptoms of Histoplasmosis begin to appear about 10 days after initial infection and include fatigue, fever, and chest pains. Most people, however, do not show any symptoms. Those with compromised immune systems are generally more at risk of developing Histoplasmosis. The disease cannot be transmitted from person to person.

Cryptococcosis is another fungal disease associated with pigeon droppings and also grows in soils throughout the world. It is very unlikely that healthy people will become infected even at high levels of exposure. A major risk factor for infection is a compromised immune system.

Psittacosis (also known as ornithosis or parrot fever) is a rare infectious disease that mainly affects parrots and parrot-like birds such as cockatiels, and parakeets, but may also affect other birds, such as pigeons. When bird droppings dry and become airborne people may inhale them and get sick.

In humans, this bacterial disease is characterized by: fatigue, fever, headache, rash, chills, and sometimes pneumonia. Symptoms develop about 10 days after exposure. Psittacosis can be treated with a common antibiotic.

Toxoplasmosis is an infection due to the parasite Toxoplasma Gondii. Toxoplasmosis is found in humans worldwide, and in many species of animals and birds. There may be no symptoms. Symptoms usually occur about 1 to 2 weeks after you come in contact with the parasite. The disease can affect the brain, lungs, heart, eyes, or liver. Medications to treat the infection include an anti-malarial drug and antibiotics

Alveolitis or diffuse interstitial lung disease refers to a group of lung disorders in which the deep lung tissues become inflamed.It occurs in people who are hypersensitive to feathers, feather dust, and fecal material — especially from pigeons. Signs can occur within two years but often take as long as 10 – 20 years with continued exposure

Where Can I Find Out More About Pigeon Related Diseases?

For more information about the health effects of pigeon-related diseases, call your doctor. If you have any questions regarding the health effects of the removal of pigeon feces, you may contact National Institute for Occupational Safety and Health (NIOSH) at 1 (800) 35-NIOSH, or visit http://www.cdc.gov/niosh/homepage.html.