Termite swarm season is upon us, and it won’t be long before scores of households in our Sacramento pest control region will be horrified by the sight of small, winged insects emerging from living room carpets or cracks between walls and tiled floors. 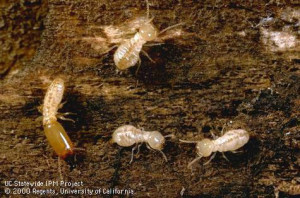 A couple of years back, about this time of year, a young single mom called our Sacramento pest control office in a panic. She had just received a phone call at work from her junior-high-age daughter: on arriving home from school, the daughter had walked into the living room to find the carpeted floor swarming with tiny wiggling bugs. By the time our customer got home, her resourceful daughter had the vacuum out and was sucking the little critters up—exactly what we had advised mom to do until our crew was able to get there.

Termites are small, white, tan, or black insects that live in large nests or colonies. Individual “castes” of insects within the colony vary in appearance and perform different jobs, much like other social insects such as ants. The large queen lays the eggs, sometimes thousands in a single day. She is always accompanied by a king. Soldier termites typically have large heads with powerful jaws used to fend off their enemies—usually ants. In some species the soldiers have snouts that squirt a poison liquid at the enemy. Most numerous are the workers, who tend the queen, build the nest and forage for food. In some types of termites, such as dampwood and drywood termites, workers are not truly different but are actually young termites. Many types of termites have long lifespans: queens and kings can live for decades; workers for several years.

Termites belong to an ancient order of insects, Isoptera, that has been in existence more than 100 million years. While humans think of them mainly as a destructive force, in fact termites make positive contributions to the ecosystem by breaking down and recycling wood and plant materials and aerating the soil.

However, when they move into our houses and buildings, termites become a destructive force that results in some $2 billion worth each year in the United States alone. Because they feed on wood, they can cause serious damage to our homes, apartments, commercial buildings or outbuildings such as barns or sheds, even to structures such as wooden mailbox posts or light poles.

Dampwood termites are found only in a few parts of the world, primarily in California and the Pacific Northwest. The Nevada dampwood termite lives mainly in high, drier mountainous areas and along the Northern California coast. The Pacific dampwood termite is the largest of the California termites, growing to nearly an inch long. Dampwood termites live and feed in very moist wood, especially in stumps and fallen trees on the forest floor. In our homes and commercial structures, they are attracted by damp conditions such as plumbing leaks or leaky window frames. They nest in wood buried in the soil but can also be present in very moist wood that does not have contact with the soil.

Drywood termites are most common in Southern California but are also found in coastal regions and the Central Valley. They infest dry, undecayed wood, both in structures and in forests. Drywood termites can survive long periods of drought. They live above ground and do not connect their nests to the soil.

Subterranean termites live in the soil, sometimes several feet below ground, and must have moisture to survive. They stay in contact with the soil by building hollow tunnels, or shelter tubes, from dirt, wood or drywall particles, about the diameter of a pencil.

The western subterranean termite is the most destructive termite found in California, causing dangerous and costly damage to wooden foundation and structural support beams.

Often homeowners like our customer discover they have a termite problem when they discover a swarm, which in most species happens in spring or fall when the termites are ready to reproduce. Other signs of termite infestation are the presence of dirt shelter tunnels on walls, dark or blistered wood, or areas of thin, easily broken wood.

Termite infestations are difficult if not impossible to control with do-it-yourself methods. New technologies are extremely effective at eradicating termites and preventing reinfestation.