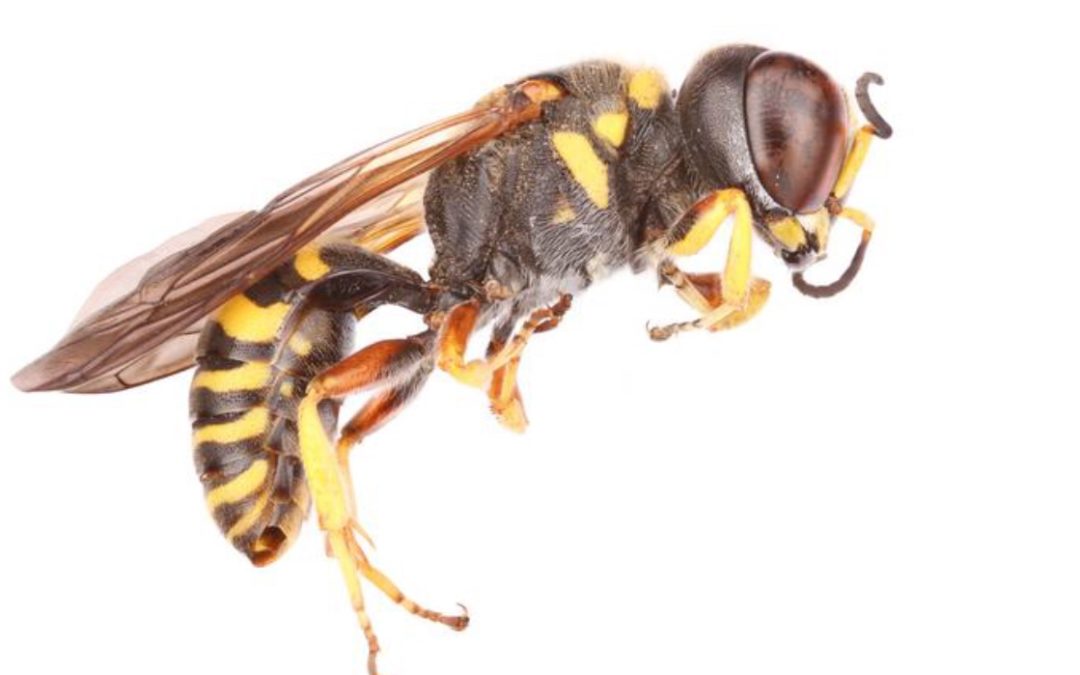 In the fall when at its peak, a western yellow jacket colony can contain thousands of insects.  In the winter worker yellow jackets die while queens hibernate.  Queens lay eggs and establish new colonies in the spring. The first generation to mature are the new workers and they begin building up the nest and as the summer begins they tend to the queen as well as subsequent eggs and larvae.  Colonies can expand to around 4000 to 5000 workers thru the summer.

In North America, there are 17 different species of yellow jacket.  The most common species in the western United States is the western yellow jacket.  Yellow jackets are fairly easy to identify by their alternating black and yellow stripes, defined waist, and long wings that lay laterally against the body when quiet. These wasps reach their peak in the late summer or fall and measure from 10 to 16mm in length.

Adult yellow jackets primarily eat sugars from sources like nectar or tree sap.  They feed the yellow jacket larvae proteins from things like insects, fish, meats that are collected by the adults.  Because they collect or feed on flies, beetle grubs, caterpillars and other pests, as well as pollinating plants, some consider western yellow jackets to be ecologically beneficial.  Since they also sting and swam trash cans in parks most people consider them pests.

Unlike other wasps, western yellow jackets build nests in the ground, beneath porches, in sidewalks, or steps.  They have also been known to build nests in structural cavities or wall voids.  Because they are close to (or in) the ground as oppose to being in a tree, they are more likely to be in contact with people.

It’s best to leave wasp and yellow jacket nests alone – unless they’re in an area with lots of human activity. Nests beside a walkway, in a playground, near a door, or around the house should be decommissioned. You can try spraying with an aerosol can of Wasp & Hornet Killer. You have the greatest chance of success spraying at night when the insects are tucked in their nest.  But for truly safe and effective results you may want to call upon a professional.

For a free pest assessment and estimate from our licensed, bonded and certified pest control professionals,contact Earth Guard Pest Services at: