Some Wasps are party animals! 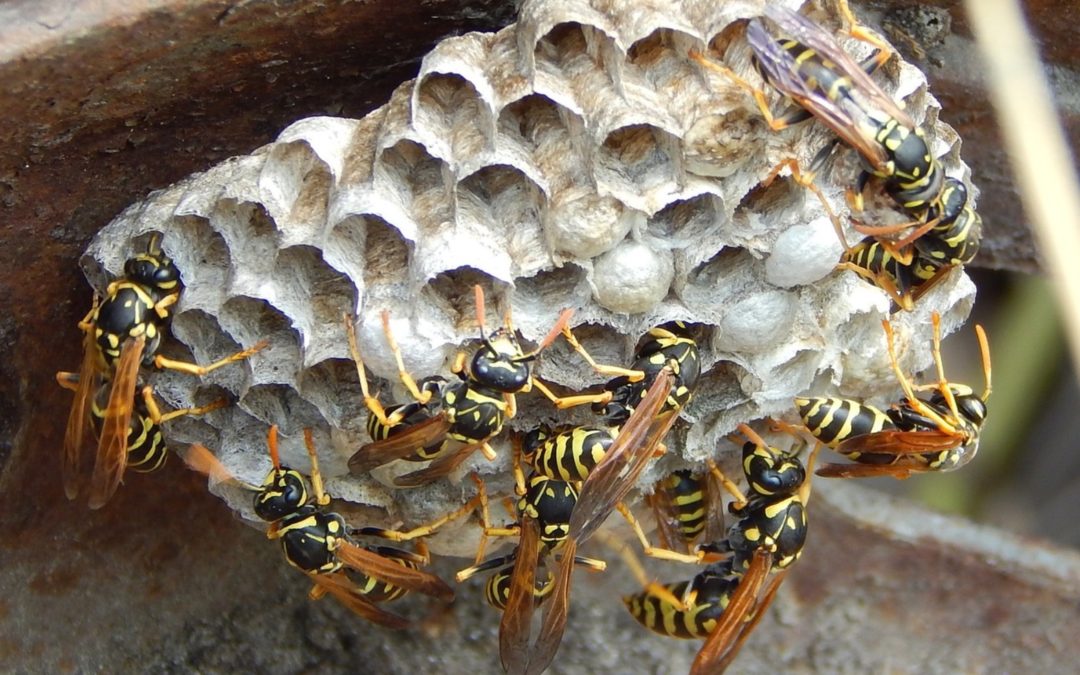 A few of the species of wasps in California, and there are a lot of them, live a social life.  They are referred to as social wasps, and they are predators and or scavengers.  These wasps provide a great benefit in that they kill large numbers of plant-eating insects and annoying flies.  However, wasps can become a problem when they threaten to sting humans.  In California, yellow jackets are the primary pests among social wasps.

Here in California there are two distinct types of social wasps—yellow jackets and paper wasps. Yellow jackets are by far the most troublesome group, especially ground and cavity-nesting ones such as the western yellow jacket, which tend to defend their nests with much hostility when disturbed. Defensive behavior increases as the season progresses and colony populations become bigger and food becomes harder to find. In fall, foraging yellow jackets are primarily scavengers, and they start to show up at picnics and barbecues, around garbage cans, at dishes of dog or cat food placed outside, and where ripe or overripe fruit are accessible. At certain times and places, the number of scavenger wasps can be quite large.

Paper wasps are much less defensive and rarely sting humans. They tend to shy away from human activity except when their nests are located near doors, windows, or other high-traffic areas.

Yellow jacket and paper wasp queens typically begin their nests in spring when the weather becomes warm. The queen emerges in late winter to early spring to feed and start a new nest. If you can safely remove a nest, this is the best time to attempt to do so, before the nest grows larger.  From spring to midsummer, nests are in the growth phase, and larvae require large amounts of protein. Workers forage mainly for protein at this time—usually other insects—and for some sugars. By late summer, however, the colonies grow more slowly or cease growth and require large amounts of sugar to maintain the queen and workers; foraging wasps are particularly interested in sweet things at this time. Normally, yellow jacket and paper wasp colonies live only one season. In very mild winters or in coastal California south of San Francisco, however, some yellow jacket colonies survive for several years and become quite large.

The term “yellow jacket” refers to a number of different species of wasps including, ground-nesting species western yellow jackets, which is the most commonly encountered species,  The German yellow jacket, is becoming more common in many urban areas of California, where it frequently nests in houses.

Yellow jackets commonly build nests in rodent burrows, but they sometimes select other protected cavities, such as voids in walls and ceilings of houses, as nesting sites. Colonies, which are begun each spring by a single reproductive female, can reach populations of between 1,500 and 15,000 individuals, depending on the species.

Aerial-nesting yellow jackets, D. arenaria and D. maculata, build paper nests that they attach to the eaves of a building or that hang from the limb of a tree. The entrance normally is a hole at the bottom of the nest. These aerial nesters don’t become scavengers at the end of the season, but they are extremely defensive when their nests are disturbed. Defending D. arenaria sometimes bite and sting simultaneously. Wasp stingers have no barbs and can be used repeatedly, especially when the wasp gets inside clothing. As with any stinging incident, it is best to leave the area of the nest site as quickly as possible if wasps start stinging.

Don’t let wasps party at your place, for bee and wasp control, and all other pest management services, contact Earth Guard Pest Services at: