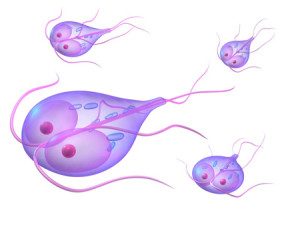 Pests come in many forms: flying, crawling, furry–but even teeny tiny microscopic parasites can cause reason for concern. Though we humans have antibacterial soaps, household cleaners, and alcohol wipes to help protect ourselves from germs and parasites, there are still members of the family who remain vulnerable to microbial menaces: namely, Fido, the beloved family dog. Giardia is not uncommon in our Sacramento pest control region, and although it is not a pest that is suitable for traditional pest control treatment, there are several steps pet owners can take to minimize the risk to their four-legged friends.

Dogs are at risk of exposure for many diseases that are usually protected against with puppy vaccine series. Rabies, parvo, distemper, and kennel cough (bordatella) are all combated with vaccines available from your local veterinarian. However, there is another disease that can be picked up at kennels or dog parks due to exposure to tiny parasitic organisms known as giardia. 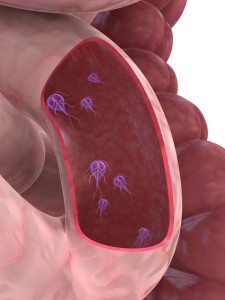 As explained by the Center for Disease Control (http://www.cdc.gov/parasites/giardia/), giardia is a parasite that is found in feces and contaminated water, food, and soil. It is characterized by a microscopic pear-shaped body and a whip-like tail (flagella) that propels the giardia through the intestines of the host and can be passed on to others via feces.

Although giardia is commonly found in dogs and cats, it also can be carried and passed along by other animals in our Sacramento pest control region and has been studied in wildlife such as beavers, bears, river otters and rodents. Humans also can contract giardia via contact with animal feces or contaminated water or another infected human.

Contaminated water can be treated for giardia by boiling for at least one minute, or by a 1% bleach solution; however, the amount of chlorine found in drinking water is not sufficient to kill giardia. Giardia cysts can survive outside of the host’s body for extended periods of time, and can survive harsh weather conditions.

Healthy adult dogs can carry the giardia parasite, symptom free, for a long time. However in puppies as well as dogs with compromised immune systems, symptoms of infection can occur—mostly diarrhea, significant weight loss and dehydration.  Because these symptoms mimic other bacterial infections, such as salmonella, correctly diagnosing giardia requires fecal inspection by a veterinarian. Treatment may include anti-parasitic drugs, which on the down-side can cause side effects such as nausea, vomiting, and fever, and do not offer a 100% guaranteed cure, so prevention really is the best option.

1) Limit exposure to unknown and possibly infected other dogs. Some veterinarians caution against taking your pet to a dog park for this very reason.

3) Consider fencing your property or taking other measures to keep wildlife or other neighborhood pets out of your yard.

4) Stop your dog from eating feces or drinking water from puddles, streams, ponds, other dog bowls or public dog bowls such as those outside restaurants or in dog parks, or other unsanitary containers.

5) Bathe your dog after visiting a dog park, or at least thoroughly rinse its paws.

6) Humans can catch giardia as well, so be sure to maintain your own hygiene, especially when cleaning up dog waste and kennels.

Completely protecting against exposure to giardia is a challenge, particularly if you want you and your dog to live an active and social life. Most dogs enjoy and benefit from the socialization they get from dog parks, and there will probably come a time you will require the services of a groomer, kennel, or doggie day care. Although professional pest control providers such as Earth Guard Pest Services can’t directly treat for microscopic parasites such as giardia, we value your health and the health of your family, including the family pets. We encourage you to stay informed, be aware, and don’t be shy about asking us any questions you may have regarding parasites and other pest problems.

For more information about giardia in dogs, check out the following resources: