Spider Bites Rare, But Can Be A Pain 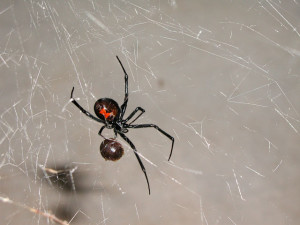 Spiders, long a favored subject of sci-fi movies and horror novels, seem to provoke an especially strong yuck factor in humans. Although we know on an intellectual level that they have many beneficial purposes in the eco-system, including eating other insect pests, most of us don’t want them in our kids’ bedrooms.

Now that warm weather has arrived, spiders are proliferating outdoors and often making their way into our homes.

Of the more than 50,000 species of spiders, only a relatively few of them are able to bite humans, for the simple reason that most have mouth parts too small to break human skin. Only one type of California spider, the Black Widow, is considered to be a serious medical danger, particularly to small children, elderly or frail adults. (See our article, “Why Spiders Don’t Make Good House Guests,” for more information about Black Widow spiders.) Even at that, it has been more than 10 years since anyone died from a Black Widow bite, largely because effective treatments have been developed.

A few years back, we heard a lot in the news about brown recluse spider bites, whose bite can be fatal or create serious, debilitating injuries. Brown recluse spiders are found in the Southern United States and do not live in California, although there are occasional reports of one having hitched a ride on a moving van and showing up here. A cousin of the brown recluse, the South American native Loxosceles laeta, has been spotted in Los Angeles County. Another cousin, the Lososceles deserta, or desert recluse, is found as far north as Merced and Fresno counties, but not in our Sacramento pest control region.

One source of confusion is that it can be hard to distinguish one type of spider from another. Even the distinctive shiny black of the Black Widow can vary, and immature females may have lighter brownish and variegated markings.

A number of spiders that are sometimes found in or around our homes may be mistaken for a brown recluse. And while their bites are not nearly as serious as that of the brown recluse, they can leave a painful wound that resembles a brown recluse bite as well as other symptoms. These include the running spider, jumping spider, wolf spider, tarantula, sac spider, orbweaver spider and hobo spider, also known as the northwestern brown spider.

Symptoms of a spider bite may include pain and burning at the site of the bite, a circle of pale skin surrounding the red center of the bite, which may form a blister or ulcer and burst. Care should be taken to keep the bite clean and disinfected; seek medical attention immediately if infection sets in. In some cases, the victim may develop a red, itchy rash within the first three days, muscle and joint pain, fever, chills, swollen lymph nodes, headache, nausea and vomiting. Hobo spider bites, in particular, may cause a painful, open wound that is slow to heal and is frequently misidentified as a brown recluse bite. See your doctor if the bite becomes infected or healing is delayed. Wolf spider bites can result in blackening of the skin in the bite area, and pain and swelling may persist for 10 days or longer. In most cases, symptoms of a spider bite will go away without treatment within a week to 10 days.

The best way to determine the type of bite is to trap the critter who did it, if you can do so safely, or collect it in a plastic bag if it has been killed, and take it to a pest control professional or University extension facility for identification. But many times, the victim doesn’t even know he or she has been bitten until a sting is felt or other symptoms develop. Stings or bites from other insects, poison oak or staph infections are often mistaken for spider bites. In cases where the bite is believed to be from a Black Widow or brown recluse spider, seek medical help immediately.

Here is some additional advice for treatment of spider bites from the California Poison Control System:

Remember, it is difficult to control spiders with over-the-counter pesticides. Reducing clutter, de-webbing, cleaning in corners and sealing cracks and crevices where spiders can get in may help. If you need help with uninvited spiders in your home or place of business, call our trained Sacramento pest control professionals at 916-457-7605 for a same-day inspection, free estimate and information about our integrated pest management services.